About a million years later…back with waffles 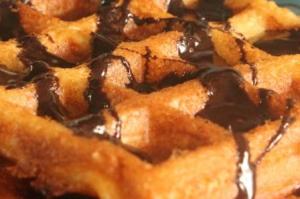 Its been about a million years since I started the blog and then didn’t do anything about it. Not that I didn’t intend to, just that I never ended up posting. Didn’t stop cooking ofcourse. (Or working or sleeping, or cursing the never-ending Mumbai monsoons, or buying a new camera! (yay!) or dreaming about starting my own restaurant..obviously, life doesn’t stop. )

I have been feeling guilty. The guilt festering away as always, eating away at my insides and me eating away to compensate for that. What a vicious cycle. But never mind,  atleast some of the pics will be up today and the recipes will follow I promise.

Coming back to today…today I made waffles for breakfast. To celebrate having some time off after some very hectic weeks at work. Now, waffles and me have had a tempestuous relationship so far. As a kid in India I grew up with this romantic image of waffles. Half fairy food, half Lockers wafer biscuits, in my mind they were crunchy on the outside and melting soft inside. They looked like they were out of a fairytale and went with my image of the plentiful fanciful west – full of Enid Blyton, jams jellies, doughnuts, chocolate houses, cream rolls, strawberries dunked in whipped cream…all things nice.  (I later discovered that jams and jellies were too sweet to be nice and the west was anything but a fairytale.) Incredible how the imagination is so much more powerful than reality. So while other kids were dreaming of growing up and owning Porches, I dreamed of growing up and owning a waffle maker.  I had never eaten waffles. But I was already in love with them. I knew them in my heart. And I knew my heart would recognize them and they would know me for the besotted devotee I was. We would be happy together forever. If only we could be together. Sigh!

When I visited Mumbai (around 9 years back) I hunted around for a waffle maker in Alfa (Parle) without success. Crest fallen, I decided I wouldn’t give up. 3 years later, back in Mumbai for good, I dragged my friend Sukhada around looking for the waffle maker of my dreams. No luck, not to mention not enough money. And then a few years back, (Sukhada had moved to the US alas!) I found the waffle maker my heart had been craving for.

SO I got home and whipped up a batch and had my first batch of waffles ever. I wish I could tell you it was everything I hoped for. That my reality was better than my dreams. That we lived happily ever after….Unfortunately, it all but broke my heart. The waffles were like waffle shaped pancakes. Tasty ..but where was the waffle of my dream? Loacker wafer crisp on the outside and melting inside. Crestfallen but putting on a brave face, I ploughed on with the waffles for breakfast anytime I had guests over.  How could a food bring me down like this? What was a waffle anyways? Just another pancake imposter. I had tiramisu and eclairs and lemon cake and baklava and chocolate chip cookies. Infact i had gajjar ka halva and rasmalai and kulfi. Who needed stupid waffles? So I closed my heart to waffles. I continued to make them for friends who came over. But I would never make them for myself. That was my revenge. I never forgot, I never forgave. I did try to verify before I condemned..I had waffles in several restaurants in the US and India but each time, it would taste the same. Tasty, spongy. a pancake imposter. I gave up.

Last weekend, Atul wanted to have waffles after a long time. And..well what is a wife if not a willing slave.  (Please don’t tell Atul I said so. Dont want him getting ideas).  Anyways, I decided to surprise him. Snuck out when he was sleeping. After months of hiding away my waffle maker, I decided to fish it out and try the recipe from Cake Bible. Disaster. This time it didn’t even taste like food. The waffles never managed to leave the iron. stuck to the iron, greasy, dripping butter and tasting like nothing. Finally I thought, this is the end of the road. Me and waffles. Over. Never again.

And then I saw a waffle recipe today at Annies Easts and thought…for Atuls sake..maybe I could give waffles another chance? And what can I say. I found what I had stopped looking for. What I had been dreaming of since I was a child. What my heart recognized even as my mind refused to believe. I am sorry waffles. I should have had faith. I should have known fate was testing us. I should have known that time would bring us face to face and I just needed to wait for you. I am sorry I gave up. I will never let go again. I promise…

So here I present them to you….These waffles were made in heaven and my childhood dreams. Crisp on the outside, tender melting like air inside. Served with chocolate sauce, they prove… dreams do come true. 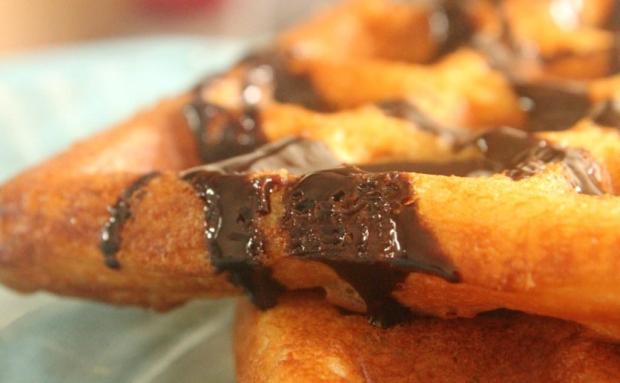 Directions:
In a medium mixing bowl, combine the flour, cornstarch, baking powder, baking soda, salt and sugar.  Whisk together to blend.  In another mixing bowl, beat together the whole milk, buttermilk, oil, egg and vanilla.  Add the dry ingredients to the bowl with the wet ingredients and whisk just until incorporated and few lumps remain.  Set aside to rest for 30 minutes.

Preheat a waffle iron.  Fill waffle wells and cook according to the manufacturer’s instructions.  Cook until crisp and golden.  Serve immediately.

Yield: depends on the size/shape of your waffle iron